I am a Pulmonary Embolism Survivor. I didn’t know much about blood clots when I was hospitalized. I just knew that it’s what killed Heavy D in 2011, and hospitalized a colleague, Vincent Herbert, for over a month in the same year. I’d been healthy and physically active my whole life, so when I started to feel the symptoms, I didn’t think much of it and thought that it was something I could sleep off. I wouldn’t have thought that 3 things that were normal and routine to me were what caused it. I can’t lie and say that I was well-aware of what the risks were, I’m 1000% sure that I didn’t do my research and didn’t think “That could happen to me.” I should have, cuz THAT SHIT HAPPENED TO ME! | Read “What is a Pulmonary Embolism” by WebMD HERE

#1 – FLIGHTS | 2013 was an active year for me. I was coming off the Life Is Good album and gearing up for the Illmatic 20th Anniversary. I had Platinum Medallion status on Delta, that’s the membership you get when you fly 75,000 miles in one year. Before September, I flew: Roundtrip from LA to the Philippines once [15-hours each way]; Roundtrip from LA to London twice [11-hours each way]; And countless roundtrips from LA to NYC and LA to ATL [4-6 hours each way]. In most cases of my travels, I had to hit the ground running as soon as I landed so my rest/sleep time WAS on the flight. All I needed was a window seat, a blanket, and a pillow and I can knock out before a flight takes off and stay seated and sleep till the plane landed. This was normal to me. | Read “Blood Clots and Travel: What You Need to Know” by the CDC HERE

#2 – BIRTH CONTROL | 60.9 million women were on birth control between 2011-2013 (I looked up this stat). That year the NuvaRing was my contraceptive of choice, and it worked well cuz I’ve never been pregnant, lol. It was prescribed by my doctor, nothing complex or out the normal. | Read “Possible Risks and Side Effects for NuvaRing” from their site HERE

#3 – CIGARS | I smoke them, it’s no secret at all. Cubans, Padron, MonteCristo, Cohiba, Romeo Y Julieta, Acid Kuba, etc…. Hand me a stick and a torch and I’m smoking the room out!! I would pick smoking a cigar over weed any day. I found joy in being at a spot where people smoked cigarettes or blunts, and I would whip out a fat torpedo!! [smh at my ego, lol] In 2013, I averaged smoking 2-4 cigars a week. | Read “Cigar – Health Effects” by the CDC HERE

It was the mix of these THREE normal things/acts that millions of other people do, that got me sick.

July 2013 | My first symptom was shortness of breath. Every time I would walk up ONE flight of stairs, my heart would race as if I just sprinted 100 meters. I’d been athletic and active my whole life, so to struggle like that was for sure not normal. So, I went to the doctor, she did a light examination, diagnosed me with “Adult Asthma”, and prescribed me two inhalers; Albuterol & Advair.

August 2013 | I still had shortness of breath + wheezing, and the inhalers were just a temporary fix. I was pulling out that asthma pump every 30 minutes like I was a teenager starting high school. Is this for real my life now?! So, I went back to my doctor. She ordered an X-Ray of my chest but didn’t see anything wrong in the film. There was construction going on at my house at the time, so she suggested that I sleep somewhere else for a few days to see if I get better. “Maybe it’s the dust…. or your dog”, she said. At that point I’ve had my dog for over 2 years and hadn’t had breathing problems. How dare she blame Brownie, lol. I told her that I’d be flying to ATL and would be there for a while, so hopefully being away from the construction and my dog would help. Spoiler alert: It didn’t.

September 2013 | I flew back to LA feeling worst. Along with shortness of breath and wheezing, my heart would beat like crazy when I would do the most minimal things; light/normal walking and laying down. “Doctor, something is wrong with my heart!!” At my next visit she focused on testing my heart; I did a stress/treadmill test, EGK test and she had me wear a cardiac monitor for a week so it could record my heart activity. The results showed abnormal activity, but she just couldn’t figure out what was causing it. She diagnosed me with Tachycardia (heart rhythm disorder) and gave me a list of actions and stretches to slow down my heart rate called “Vagal Maneuvers”. 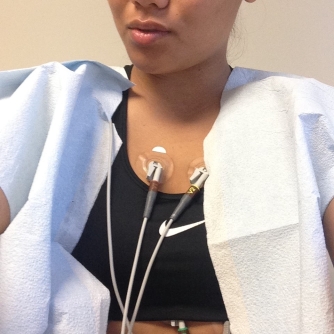 October 2013 | Still feeling like shit, I maneuvered normally at work and went on a week travel run. Between October 9th thru the 14th, I flew from LA to ATL (4 hours), travelled via sprinter from Atlanta to Miami (11 hours), rode from Miami to Orlando (4 hours), rode from Orlando to ATL (7 hours), and flew back to LA from ATL (4 hours). I got back to LA feeling very weak and stayed home for the rest of the week. Sleep, bed rest, Vicks vapor rub, humidifiers, inhalers, steroids, and every other medication I was prescribed didn’t help. I was getting worse and on Friday the 18th, I called my doctor. I’ve always been transparent with her about everything about me and my lifestyle; she knew I travelled and flew a lot for work, she knew I was an avid cigar smoker, and she knew I was on birth control because she was the one prescribing it to me. She couldn’t figure out what was wrong with me and was at a dead end. Last thing she said to me, “I’m going to prescribe you one more thing, but if you don’t get better go to the Emergency Room.” I never talked to or saw her again after this day.

That Night | Friday the 18th…. My symptoms: Intense breathing difficulty and a sharp pain in my chest every time I inhaled. My crazy ass considered going to a strip club for a birthday party that night, smh. I was hesitant about going to an ER, I thought “let me go to sleep and see how I feel in the morning. Maybe I’ll feel better.” I’ve never been to an Emergency Room before and didn’t know what to expect. I used to watch Grey’s Anatomy faithfully and that shit looked chaotic, not my idea of where I would want to spend a Friday night. I called my friend Jazzy and updated her on how I was feeling, and like an angel she convinced me. I had to go… I got to a point where it hurt to breathe.

The Emergency Room | Harbor-UCLA Medical Center was the closest ER to me. I drove myself and brought my mother with me. The waiting room was packed, and it took them about an hour to see me. For 3 hours, they ran all the tests that I’ve already done: Chest x-ray, ekg, blood, work heart monitor, etc… Last thing they did that I hadn’t done yet was get a CT scan. After the scan I slowly walked my way back to the waiting room, but they yelled out my name and stopped me before I could get there. They told me to stop walking and to stay still as they ran towards me with a wheelchair and an oxygen tank. They sat me down slowly and wheeled me to a bed in the Emergency Room and checked me in. That’s when they diagnosed me with having a PE (Pulmonary Embolism) and told me that I had several blood clots in my lungs. 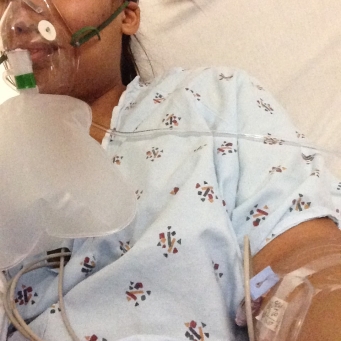 Bed #13 | When I chose to go to Harbor-UCLA, I didn’t realize that it was a county hospital. I had no idea that it would be as packed, understaffed, and busy as it was. It was a go-to hospital for people with either no insurance or low-income. I remember my boss at the time saying, “we have the BEST health insurance, why didn’t you go to Cedar Sinai?” The hospital was so packed, that they couldn’t move me out of the ER and into a private room. We attempted to initiate getting me transferred to Cedar Sinai (a private hospital in Beverly Hills) via ambulance, but the doctors advised against it. My condition was too high risk, and that transporting me or something as little as the ambulance driving over a speed bump could have devastating results. In other words, moving me could kill me. I wasn’t even allowed to get up to go to the bathroom, I had to stay still. For the first 12 hours I couldn’t eat just in case I’d need emergency surgery, and they gave me blood thinners (pills and injections) and monitored me. I barely slept because there was always some kind of chaotic emergency coming in to the 12 other beds; people screaming, kids crying, a man with a gun shot wound, etc. Horrible hospital fluorescent lighting, loud noises, and foul smells was life as I laid in Bed #13 for 4 days straight.

Recovery | My recovery took 8 months and my medication consisted of taking blood thinners nightly; a Coumadin pill and a Lovenox shot in the stomach. To clarify, I had to inject a needle in my stomach MYSELF. I had to wear an Emergency Medical Bracelet that indicated I was on blood thinners. When you’re on thinners, you bleed out easily, so I had to minimize or completely stop all activity to prevent myself from getting injured or cut. I had weekly check-ups at the hospital where they checked my blood levels so I had to stop traveling for months. No flights, long periods of sitting, I couldn’t work out, drink alcohol, smoke cigars, and I stopped using birth control. I stayed in LA most of 2014. Imagine traveling every other week for years, and then suddenly you can’t anymore; I felt stuck and unproductive. So, as therapy, I started painting; and if you know my story, you know that my painting for fun turned profitable. Look at God! I also kicked my philanthropic efforts in LA into high gear; continuing to give back to others became my purpose and was a big part of my healing. In June 2014, I was normal again. 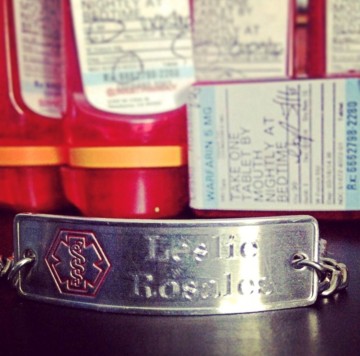 7 Years Later | I still travel often for work, but I take all the precautions to prevent clotting: I wear compression socks, and I stand up and walk every 2-3 hours on a flight. I still smoke cigars, however my average is maybe one cigar every 2-3 months and I’ve stopped using birth control. Post PE, I really got into learning more about the condition and its seriousness. Per the CDC: “Sudden death is the first symptom in about one-quarter (25%) of people who have a PE.” I really could’ve died man. But I didn’t. I’m still here to fulfill my purpose which is to help people, spread love, and good vibes. I’m grateful, I’m healthy, I’m happy, and most importantly; I’m alive.